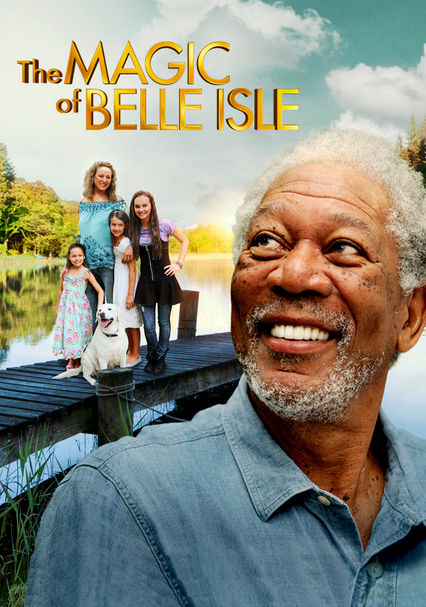 2012 PG 1h 49m DVD
After alcoholism depletes his enthusiasm for writing, celebrated author Monte Wildhorn finds his creative passion renewed when he moves to quaint Belle Isle and gets to know his next door neighbors -- a single mother and her three daughters.

Parents need to know that The Magic of Belle Isle is a drama about the inter-generational friendship between an old alcoholic writer and the three young sisters who live next door. Although the movie is rated PG, director Rob Reiner explores some heavy themes, like alcoholism, grief, divorce, and disability. There's also some strong-for-the-rating language ("s--t," "ass," "damn," "Jesus H. Christ" said a couple of times each), and a couple of quick kisses (one is in a dream). The bond that forms between the crotchety author (Morgan Freeman) and the girls may remind younger viewers that seniors have lived full, rich lives and still have something to say.

Monte begins to fancy the lovely (and much younger) Charlotte, and he dreams of them waltzing in the moonlight and kissing. Later on she does kiss him briefly. A few suggestive comments.

Monte wields a gun at a clown (albeit comically). He shoots it in the air, but no one is hurt.

A couple of uses of "s--t," as well as "bitch" (but in its literal meaning as a female dog), "ass," "damn," "hell," and the exclamation "Jesus H. Christ." Monte makes some abrasive comments, like "God told me to be an atheist." Finn calls Monte a "no-good drunk."

The Magic of Belle Isle is about the transformational power of friendship and how it's possible to make life-changing connections with people who are generations older/younger than you. It's also a story about creativity and how to work through personal difficulties.

It's a major plot point that Monte is an alcoholic, although it's discussed more than it's shown. He buys a lot of Scotch and is shown with empty bottles and glasses, but he tends to act tipsy rather than really, really drunk.