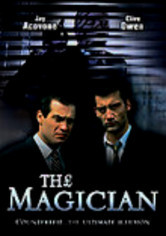 1993 NR 1h 39m DVD
Director Terry Winsor's crime drama is based on the true story of an attempt by the Irish Republican Army to flood Britain's economy with millions of counterfeit dollars. Financial risk taker David Katz (Jay Acovone) is thrilled when his plan to manufacture fake money finally pays off, but he has no idea that an intrepid British detective (Clive Owen) is in hot pursuit. Meanwhile, a mysterious figure known as "the Magician" is out there somewhere.