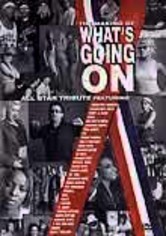 2002 NR 0h 55m DVD
In September 2001, an ensemble of superstar artists gathered in New York City to record a new version of Marvin Gaye's classic anthem, "What's Going On," in order to raise awareness and funds to fight against the scourge of AIDS in Africa. This video brings you into the recording studio and onto the set of the music video with all the artists who came together in the name of AIDS awareness and, subsequently, relief for victims of the 9/11 attacks.