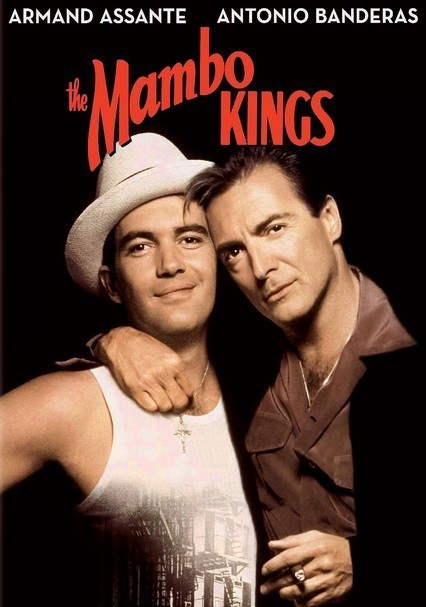 1992 R 1h 46m DVD
Musician brothers Cesar (Armand Assante) and Nestor (Antonio Banderas) Castillo flee Havana in the 1950s with hopes of making it big, but a secret Cesar hoped would stay in Cuba threatens to tear the Mambo Kings apart. Once in New York, the Castillos play the hottest clubs and find gorgeous women, but Nestor can't forget his beautiful Maria. The film is based on Oscar Hijuelos's Pulitzer Prize-winning book &NFiThe Mambo Kings Play Songs of Love&NFi_;.

Parents need to know that there are several scenes of explicit sexuality with total nudity, and other incidents with partial nudity. Characters smoke and drink throughout, with one character drinking to excess on a number of occasions. One volatile brother is the victim of a knife-wielding villain who, in a close shot, cuts his throat and leaves him for dead. Other violent moments include a nightclub shooting and a fatal car accident.

Several scenes of passionate lovemaking with total nudity; one scene with partial nudity.

The movie stays true to the Latin-American "macho" culture of the 1950s. The honorable heroes make a sincere effort to keep their distance from gangsters who have a chokehold on the New York nightclubs. Women are seen as little more than objects of desire in most instances.

Smoking and drinking throughout; lead character is drunk in a number of scenes.