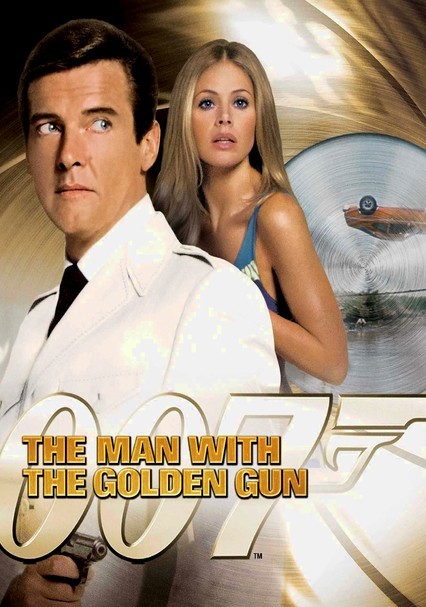 Parents need to know that The Man with the Golden Gun is the ninth James Bond movie and the second to feature Roger Moore. It contains some iffy material, but it's fairly mild and should be OK for teens. It shows guns and shooting, dead bodies with bullet holes and a little blood. There's fighting and car chases. We get sexual innuendo and several sexual situations. Nudity is frequently implied. Language is limited to "goddamn," "hell," "damn," and "ass." Pepsi signs are shown. Characters briefly smoke and drink. Fans of the Star Wars and The Lord of the Rings films may be drawn to this movie thanks to the presence of Christopher Lee as the villain. The movie is rated PG but might be closer to a PG-13 today.

Semi-naked girls in silhouette during opening titles. Bond is about to have sex with one woman when another shows up. He hides the first in the closet and has sex with the second (nothing sensitive shown). A man is shown with a third nipple. A woman dries a man's legs after swimming. Bond kisses a belly dancer's belly. A girl is shown in the shower, obscured by an opaque window. A scene takes place at a strip club. A woman is seemingly topless, her breasts hidden by long hair. A woman is seemingly naked in a pool. Women in bikinis or nightgowns. Kissing. Some innuendo.

Bond gets free reign while accomplishing his mission; he has a license to kill, and he's prone to seducing women, drinking, and smoking. He's deceptive. He rarely learns any lessons while saving the day. In one scene, he pushes a boy into the water. Some cultural stereotyping. Two teen girls are, surprisingly, shown to be skilled martial artists (they unexpectedly rescue Bond).