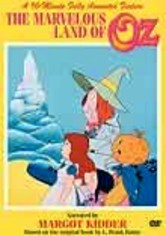 1987 NR 1h 30m DVD
This installment of the fun animated series follows a courageous little boy named Tip and his buddy, Jack Pumpkinhead. As they travel to the Emerald City, they meet up with their leader, Dorothy, as well as Glinda the Good Witch, who agrees to help them save the entire city from the dangerous General Ginger. Will the four friends be able to stop the general and her all-woman army? Narrated by Margot Kidder.