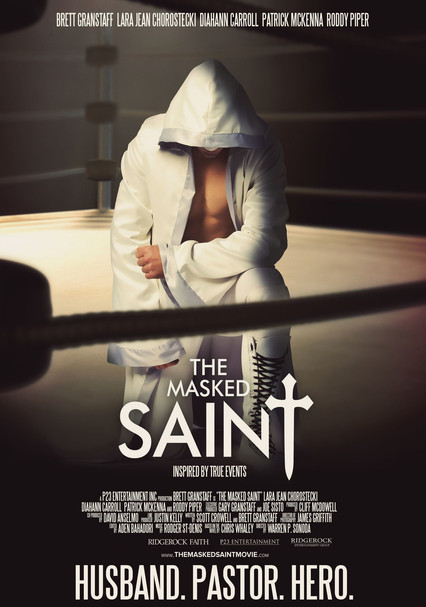 2016 PG-13 1h 45m DVD
Former professional wrestler Chris Samuels moves on to become a small-town Baptist pastor who, in addition to performing his ecclesiastical duties, doubles as a masked vigilante prepared to violently protect his flock from marauding criminals.

Parents need to know that The Masked Saint is a faith-based movie "inspired by a true story" about a talented competitor who gives up his wrestling career to take over a struggling church. The Baptist congregation, in a fading part of a major Michigan city, is in desperate need of members, funding, and spiritual support. The novice minister must quickly grapple with some of society's serious issues (i.e., spousal abuse, prostitution), as well as an assortment of challenging personalities. The violence of the ring (seen in many bouts throughout the film, with the expected ferocity of kicking, punching, throwing, pummeling, pounding, and stomping) follows the hero to his new parish, where he is once again a participant in fights, this time real ones on the streets of his city (guns, a steel pipe, fists are the weapons in play). Strong religious messages are delivered throughout, most of them traditional and well-worn ("The Lord never gives us more than we can handle").

A prostitute is threatened by her pimp; returns to church seeking a new start and is, at first, the object of congregants' contempt. A married couple kisses warmly.

Numerous hard-hitting wrestling bouts, throws, kicks, punches, pounding into the matt, choking. In one incident, an overpowering participant purposely breaks his opponent's legs. Some brutal street-fighting: In separate sequences, both a pimp with a steel pipe and thieves with guns on the attack are taken down forcefully by a masked vigilante. Evidence of assault is observed on wife as husband threatens her.

"Crap," "hell," "turds," "butt." A man demeans his wife, calling her an "idiot." A pimp cruelly degrades a young prostitute.

Finding and using God-given gifts, along with working with others unselfishly, can work miracles. Multiple explicit faith-based messages: "The Lord never gives us more than we can handle." "The world can be changed by our actions." "God doesn't always respond the way we think He should, but He always responds."

A cruel husband is referred to as a drunk. One character smokes.