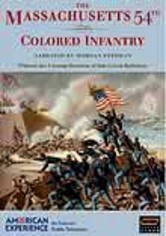 2005 NR 0h 56m DVD
Narrated by Morgan Freeman and peppered with historical tintypes and expert commentary, this documentary tells the story of the Massachusetts 54th Colored Infantry, the first all-black Union regiment depicted in the multiple Oscar-winning film Glory. The 54th was given the most dangerous assignments, and they fought valiantly to prove to the commanders and the rest of the country that black Americans had what it took to be first-class soldiers.