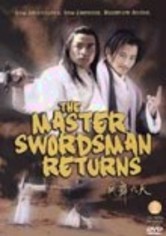 2002 NR 1h 30m DVD
Christopher Lee reprises his role of Ximen in this sequel to The Master Swordsman. When Lu Xiao Feng (Mark Cheng) is accused of defiling Ximen's wife, he must flee in the face of the elder swordsman's fury. In the process, Lu happens upon the Phantom Villa, where he uncovers a clandestine scheme that could obliterate civilization, forcing Lu to make a decision: Keep running or stand up and be counted.