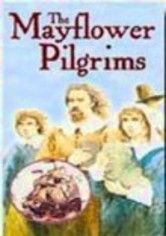 1995 NR 0h 43m DVD
This documentary examines the story of the 17th-century English religious separatists who fled their native soil seeking the freedom to worship as they pleased, eventually crossing the Atlantic on the Mayflower and landing in the New World in 1620. The program focuses on several of the known personalities involved in this epic journey, as well as the convictions they brought with them that helped form the foundation of American culture.