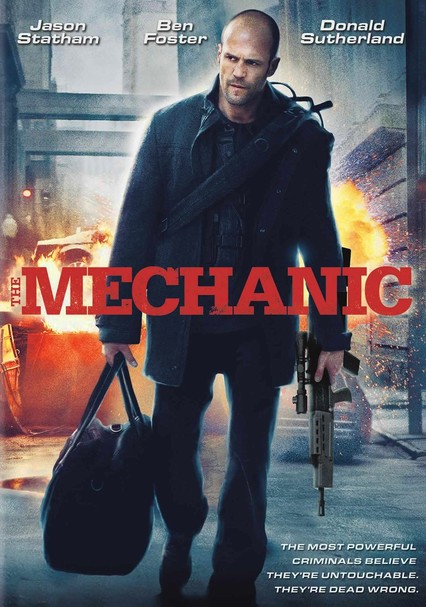 2011 R 1h 33m Blu-ray / DVD
When his mentor is murdered, lone hit man Arthur Bishop trains the man's son in the ways of the professional kill. Together Arthur and his eager apprentice hunt down those responsible for executing Steve's father.

Parents need to know that this remake of a 1972 hit man action-drama is extraordinarily violent, with dozens of shootings, beatings, stabbings, stranglings, and killings, with lots of blood. Language is strong (including many uses of "f--k" and "s--t"), and there are some pretty graphic sexual situations (with breast/buttock nudity). One character drinks hard liquor and smokes incessantly (other, minor characters are drug dealers and junkies). The characters have few redeeming or admirable qualities, and there are few consequences for their destructive actions.

Constant action violence, with dozens of shootings, stabbings, beatings, stranglings, explosions, various other brutal killings, and lots of blood. The hero threatens to grind up a teen girl's arm in a garbage disposal. These acts are shown with few or no consequences.

Very strong language includes multiple uses of "f--k" and "s--t" in various permutations. Other words include "p---y," "damn," "goddamn" and "Jesus Christ" (used as an exclamation).

The characters' destructive actions -- which cause many deaths -- have no (or few) consequences. They live selfish, solitary lives and are cynical, trusting no one -- not even each other.