The Medals of World War II 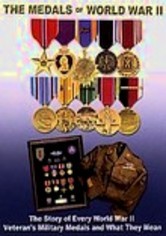 The Medals of World War II

2006 NR 0h 51m DVD
This heartfelt historical program pays tribute to the heroic deeds of World War II veterans by telling the stories behind the medals they earned, in the words of the men and women who earned them. Highlights include the fascinating truth about why some 14 million Americans didn't immediately receive their medallions upon returning home from combat: Due to increased production of ammunition during wartime, there wasn't enough brass to make them.