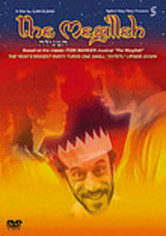 1983 NR 1h 20m DVD
A group of Jewish villagers is caught up in the annual tradition of putting on a stage version of the Megilla, the biblical story of Esther, Queen of Persia. But when the participants begin to act like the characters they're portraying, the village itself becomes a comic reflection of the ancient story. This musical comedy is an adaptation of the classic Yiddish play by the prominent poet and playwright Itzik Manger.