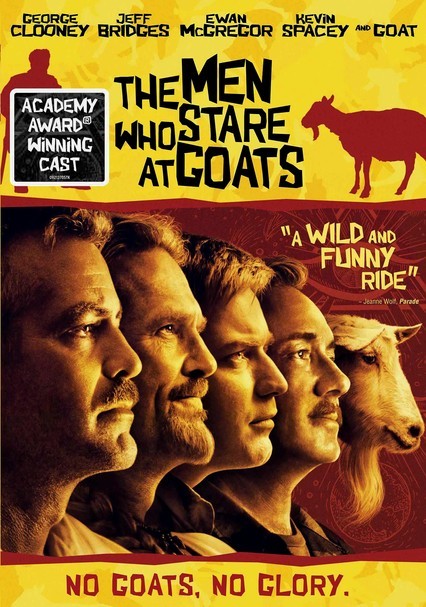 2009 R 1h 34m Blu-ray / DVD
Journalist Bob Wilton latches onto an unbelievable story in Iraq when he meets Lyn Cassady, a man of mysterious origins who reveals he was a "warrior monk" trained by the U.S. Army to develop psychic powers.

Parents need to know that this offbeat war comedy based on the same-named book by Jon Ronson could be a magnet for teens intrigued by both the loopy humor and stars George Clooney and Ewan McGregor. Drug use -- presented in a humorous context -- plays a key role in a couple of significant scenes, which means that if your kids see it, a good talk about drugging might be in order. There's also drinking and smoking, some fighting and war-related violence, a fair amount of swearing ("f--k," "s--t," and more), and brief partial nudity (topless women and men's buttocks).

No sex, but some partial nudity, including topless women in hot tubs and naked men seen from behind and at a distance.

Much of the movie takes place during the Iraq War, and heavily armed soldiers and military contractors are involved in brief firefights. Flashbacks to the Vietnam War show combat, and a man is shot in the chest. Two characters are kidnapped at gunpoint. Some hand-to-hand fighting, and one character commits suicide.

Though there's plenty of loopy behavior and manipulation here, the film ultimately wants to emphasize how important it is to believe in yourself and trust your instincts.

References to several well-known companies, including Starbucks, McDonald's, and Halliburton.