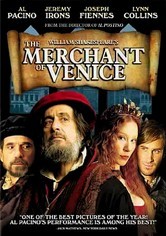 2004 R 2h 11m DVD
Lacking money to woo an heiress (Lynn Collins), smitten Bassanio (Joseph Fiennes) turns to his merchant friend, Antonio (Jeremy Irons), whose cash is tied up. But he secures a loan from Shylock (Al Pacino) on the condition that if Antonio defaults, he'll literally pay with a pound of flesh. Michael Radford directs this lush adaptation of William Shakespeare's incendiary drama about passion and justice amid an anti-Semitic atmosphere.

Parents need to know that most teens will have trouble at first following Shakespeare's untouched and dense prose. Given that the anti-Semitism of the time is given explicit treatment with Christian characters spitting on, cursing, threatening, and "damning" Jewish citizens forced to live in a ghetto, parents should be aware that sensitive viewers of any age may be upset and that this plus other mature themes render it unsuitable for younger viewers. A character's life is threatened, a young woman runs away with a man against her father's wishes, a man's anger becomes madness, a young woman refers to being orphaned, characters manipulate and lie to one another, and otherwise "good" people show grave intolerance to others based upon their religion or nationality. There is social drinking. Bare-breasted prostitutes beckon to passing men, and one scene has two characters doing business in a brothel.

Topless women as a symbol of prostitution or debauchery, implied sexuality.

Peril, a character's life is endangered.

Some. Shakespeare's insults are impeccably phrased but they are derisive name-calling nonetheless.

Anti-Semitism is a major theme in this movie with characters being mistreated and abused with no consequences to those who commit the crimes.