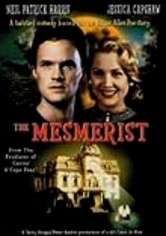 2002 NR 1h 28m DVD
Based on an Edgar Allan Poe story, this film tells the grimly comic tale of a bad-tempered old man (Howard Hesseman) who cheats death, only to go on tormenting the living. When a medical experiment leaves the grouch hovering between life and death (and able to describe the world beyond), things get tricky for his daughter (Jessica Capshaw) and her beau (Neil Patrick Harris, of "Doogie Howser, M.D." fame), who can't get their hands on his estate.