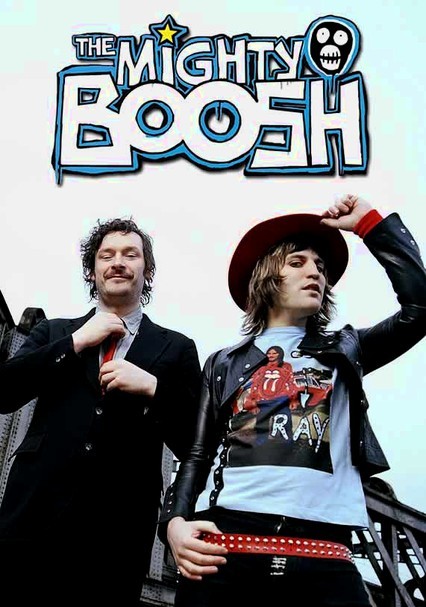 2004 NR 3 seasons
Vince Noir and Howard Moon are two employees at a zoo run by the maniacal Bob Fossil. Their bizarre musings lead them on surreal adventures, as their strange surroundings and odd banter result in one offbeat encounter after another.

Meet Vince Noir and Howard Moon, two of the funniest screwballs in the universe. These episodes from the cult British series follows the fantastic adventures of these wacky zoo workers as they they trek through time and space on surreal trips.

Oddball zoo workers Vince Noir and Howard Moon go to a distant planet in search of the Jacuzzi of Youth, stumble into the yeti's lair and more in this set of adventures from the offbeat comedy series.

Howard Moon and Vince Noir are now working in Naboo's second-hand shop - 'Nabootique'. With their accomplices, Naboo the enigma and Bollo the ape, they reunite us with some familiar faces including the Hitcher, the Moon and Bob Fossil.

Parents need to know that this British comedy series about the exploits of two best friends -- who constantly insult and belittle each other -- is coarse and crass, as well as often nonsensical. The creators/stars have a big following for their act on stage, on the radio, and now on TV, so teens may already be aware of the show and want to watch. Expect a fair amount of swearing, plenty of drinking (sometimes to excess), and lots of references to sex. In other words? Typical Adult Swim fare.

Some references to sex, including prostitution and oral sex.

The comedy on this show is very guy-oriented, with lowbrow jokes about failed efforts to meet women, sexual encounters gone awry, and plenty of drinking. The main characters clearly have a strong friendship ... which they demonstrate by constantly teasing, mocking, and belittling each other, albeit in a "loving" manner.

Beer cans are visible in several scenes; Heineken appears to be a favorite. Some references to other TV shows and movies -- sometimes obvious and sometimes more subtle.

A fair amount of drinking, jokes about drinking, and making plans to go drinking. Characters are shown playing drinking games, getting drunk, and suffering from hangovers.