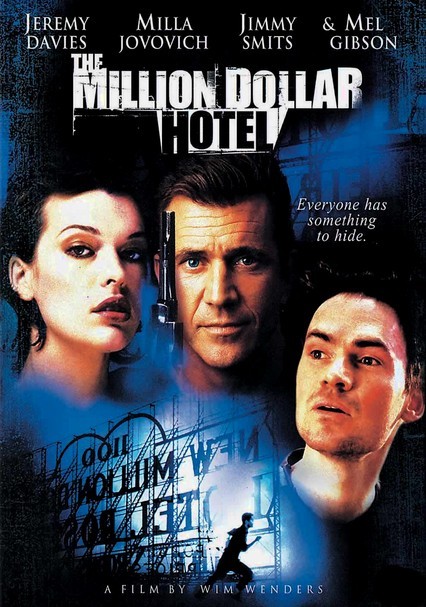 2001 R 2h 2m DVD
A gang of outcasts and misfits live in a downtown Los Angeles fleapit known as the Million Dollar Hotel. When a billionaire's son (Tim Roth) dies in the hotel, a federal agent (Mel Gibson) arrives to investigate, turning everyone's lives upside down. While trying to determine whether the death was a murder or a suicide, he uncovers a web of deceit that runs surprisingly deep. Jeremy Davies and Milla Jovovich co-star.

Parents need to know that there is a lot of mature content here, but most older teens won't have the patience for it anyway. Parents should be aware of some mature themes (murder/suicide, the exploitation of mentally handicapped characters) as well as some extreme profanity and violence.

There is physical affection between Eloise and Tom Tom, but nothing too objectionable.

A suicide (or murder) in the form of a plunge from a building.

Plenty--there's a very foul-mouthed elderly resident who uses the F-word and every other profanity imaginable.

Some diversity in the cast.