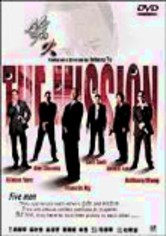 1999 NR 1h 28m DVD
In this Hong kong actioner, when a hit on a triad boss fails, the mobster's brother (Simon Yam) assembles an unlikely group of gunmen as bodyguards, including a barber turned killer (Anthony Wong Chau-sang) and a take-no-prisoners barkeep (Francis Ng). The quintet ultimately gels into a precision team of assassins who eliminate threats to their employer. But after one of them beds the boss's wife, the other four must waste him or die themselves.