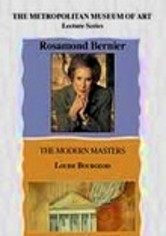 1995 NR 1h 0m DVD
Rosamond Bernier, co-founder of &NFiL'Oeil&NFi_; magazine and friend to many great artists of the 20th century, discusses the work of Louise Bourgeois in a sold-out lecture at the Metropolitan Museum of Art. Known for her striking sculptures that are heavily influenced by surrealism, Bourgeois began her career as a painter and even assisted Fernand Léger before becoming a star of the exhibition circuit when she was well into her 80s.