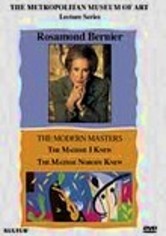 2006 NR 1h 55m DVD
Rosamond Bernier, co-founder of &NFiL'Oeil&NFi_; magazine and friend to some of the greatest artists of the 20th century, unveils a stirring portrait of Henri Matisse during two sold-out talks at the Metropolitan Museum of Art. In "The Matisse I Knew," Bernier recalls her first encounter with Matisse in the south of France. In "The Matisse Nobody Knew," she delves deeper into the artist's work and reveals the traits that make it revolutionary.