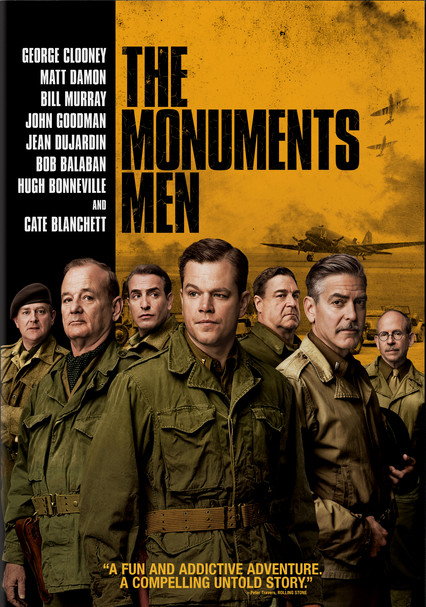 2014 PG-13 1h 58m Blu-ray / DVD
In a race against time, a crew of art historians and museum curators unite to recover renowned works of art stolen by Nazis before Hitler destroys them. Written, directed and starring George Clooney.

Parents need to know that The Monuments Men is a fact-based war drama that feels like a cross between Ocean's Eleven and Saving Private Ryan and features some of the same actors. Expect some wartime violence, including some close-range shooting, and scenes with bloody and injured soldiers. Characters smoke frequently and drink occasionally, and there are a few swear words sprinkled throughout the high-stakes action.

Very tame flirting between two people who are thrown together during wartime, though the man chooses to be faithful to his wife.

Several scenes feature wartime violence, including explosions and gunfights. One scene takes place in a battlefield hospital filled with bloody and dying soldiers. A few characters are shot, sometimes at close range.

Is a painting or statue worth a human life? Stokes and his men set off on an important mission to find and protect the artifacts that define Western culture, items that would be a terrible blow to humanity if they were lost or destroyed during war, and some circumstances force them to address this thorny question.

Many people smoke cigarettes, which was typical at the time. Some scenes feature people drinking wine, champagne, cognac and other beverages in social situations.