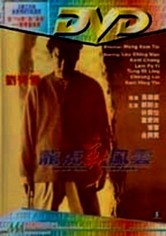 2000 NR 1h 30m DVD
Cheng Ming-Fen (Kent Cheng), an eager, young police academy graduate, accepts a dangerous undercover mission to infiltrate a vicious gang. After three years, the gang's leader (Robin Shou) finally incorporates Cheng into his plans. But when a botched police raid causes the cops major embarrassment, Cheng becomes the scapegoat -- and the cops' most-wanted fugitive. If he wants to clear his name, Cheng will have to survive his waking nightmare.