The Mother of the Kings 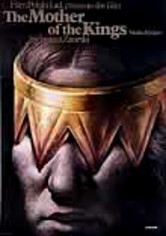 The Mother of the Kings

1983 NR 2h 6m DVD
Filmed in grainy black-and-white to mimic the look of authentic newsreel footage, this acclaimed drama examines Polish history from 1933 to 1956 -- spanning of the World War II years and the reign of Joseph Stalin -- through the eyes of a struggling widow (Magda Teresa Wójcik) and her sons. A faithful adaptation of Kazimierz Brandy's eye-opening 1957 novel by the same name, the film was once banned by the Communist party.