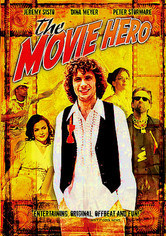 2003 NR 1h 38m DVD
In his feature film debut, director Brad T. Gottfred delivers a spoof of cinema clichés with a memorable protagonist named Blake Gardner (Jeremy Sisto), who believes his life is a movie. Playing to an audience only he perceives -- and determined to entertain them -- Blake recruits a comical black sidekick (Brian J. White), attempts to apprehend the bad guy (Peter Stormare) and begins romancing his court-appointed psychotherapist (Dina Meyer).