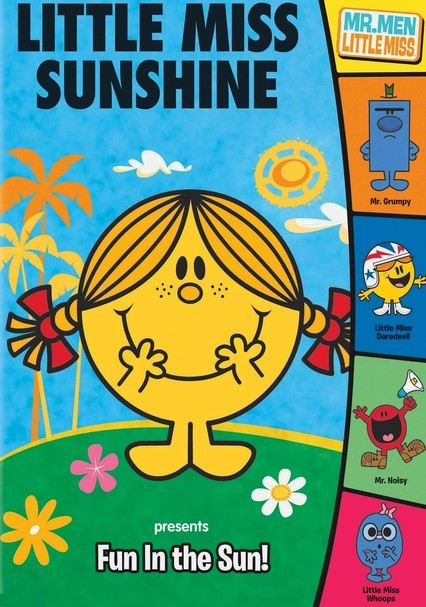 2009 TV-G 1h 9m DVD
Dillydale -- hometown to a bevy of Mr. Men and Little Misses -- serves as the setting for this animated kids' variety show based on Roger Hargreaves' popular children's books from the 1970s, '80s and '90s. The always-perky Little Miss Sunshine -- co-host of "Good Morning Dillydale" -- joins a raft of other Mr. Men and Little Misses (many of whom aren't nearly as sunny) in comedy sketches, dance numbers and more in the episodes collected here.

Parents need to know that each character in this animated sketch comedy based on a popular series of kids books is named for the emotion or personality quirk he or she embodies. Some exhibit positive traits (Little Miss Sunshine or Mr. Happy, for example), but others have less-enviable attributes -- like rudeness, laziness, and messiness. The mix of personalities makes for silly, kid-friendly humor; the show also touches on the challenges of relating to people who are different and celebrates the art of self-expression. On the downside, characters are consistently one-dimensional and never adjust their behavior based on the situation or the others' reactions.

A few characters are clumsy by nature and so often sport bandages, but injuries themselves aren't shown.

The show celebrates self-expression and self-acceptance. But some characters embody negative personality traits like laziness and rude behavior, and there are no repercussions for their actions, which are played for humor.

The cartoon is based on a series of kids' books, so young viewers may take a new interest in them (but nothing's wrong with that!).