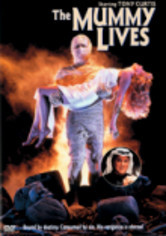 1993 PG-13 1h 37m DVD
Tony Curtis stars as an angry reincarnated soul in this horror film based on an Edgar Allen Poe story. When an ancient tomb is opened, the mummy inside awakens and transforms into Dr. Mohassid (Curtis), a wayward soul determined to reclaim his lost love. Convinced that Sandra (Leslie Hardy) is the reincarnation of his beloved, Mohassid embarks on a reign of terror in an attempt to reunite with his Egyptian princess.