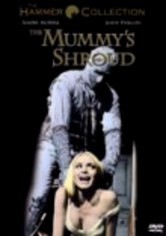 1967 NR 1h 30m DVD
An intrepid band of archaeologists unearth the hidden tomb of Kah-to-Bey -- a miraculous find. Ignoring the ominous warnings of the tomb's guardian (Roger Delgado), Sir Basil Walden (Andre Morell) and his party move Kah-to-Bey to Cairo and place him next to his slave and protector, Prem. When the guardian reads aloud the words on the shroud covering Kah-to-Bey, Prem comes to life and wreaks havoc on those who would defile his master.