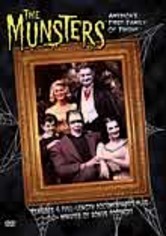 2004 NR 2h 30m DVD
Little-known facts about the 1960s television series "The Munsters" abound in this documentary that details the show's conception, development and success through cast and crew interviews, rare footage and scenes from the show. The program, which details the behind-the-scenes antics of the classic hit comedy, also includes biographical documentaries of actors Fred Gwynne, Yvonne De Carlo and Al Lewis.