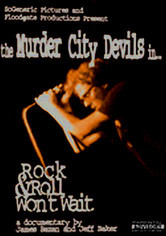 2004 NR 0h 58m DVD
Get an insider's look at the lives and careers of the members of one of Seattle's most popular bands, The Murder City Devils. On tour and at home, the band let cameras track their every step and offered a glimpse into the life of a rock star via live performances, backstage footage and one-on-one interviews with band members and close friends and family. Also included are two music videos and more.