The Murder of JFK: A Revisionist History 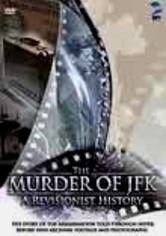 The Murder of JFK: A Revisionist History

1999 NR 3h 0m DVD
Diving headfirst into the theories surrounding the 1963 assassination of President John F. Kennedy, this fascinating program looks at the tragedy in light of the Cold War and America's political and cultural climate at the time. Special features include the first digital rendering of the famous Zapruder film, the only known color footage of Lee Harvey Oswald and a surprising link between Alfred Hitchcock's Psycho and the FBI's report on Oswald.