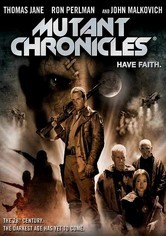 2008 R 1h 41m Blu-ray / DVD
In a futuristic world where Earth is divided into four warring "Corporations," a frightening new breed of NecroMutant threatens to destroy the global population unless the leader of an old monastic order can destroy the beasts and save the planet.

Parents need to know that this is a review of the movie in theaters and not the Director's Cut that's available on DVD. This violent sci-fi action movie is bloody, gory, and grim. A man kills a wounded comrade in arms at point-blank range; skulls are penetrated by monsters' inhuman claws; extensive swordplay means limbs and heads are lopped off with remarkable frequency -- and so on. Plus, the film's overall tone is bleak, with a resigned cynicism that both evokes the old-school war films and makes the film a bit of chore to watch. You can also expect constant strong language, some crude sex talk, smoking, and drinking.

Crude discussion of sexual conduct. Soldiers imply that they'll take sexual advantage of a woman they're rescuing from certain death.

Constant, blood-spurting, sci-fi war violence, much of it perpetrated by hideous monsters. Explosions from artillery kill people; there are images of bloody field surgery, as well as dead and wounded bodies (including people shot in the head). The monsters use their clawed hands to kill, impale, and slash human beings, with the effects shown in blood-spurting, slow-mo close-up. Eviscerated human beings are seen dropping their guts to the ground. Limbs are lopped off.

While much of the film's action is depicted as being toward a greater good, the film is so violent and hard-bitten that it makes it hard to sift the good out from the bloody background. There's extensive discussion of corporate control, as the four multinational companies who run the world wageand fight wars.