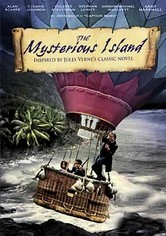 1995 NR 5 discs
Six Civil War prisoners elude the firing squad by commandeering a hot-air balloon and piloting it to freedom. But when a storm forces them to crash-land on a mysterious Pacific island, their escape is put on indefinite hold. Making matters worse, the mysterious Capt. Nemo (John Bach) is monitoring the group's every move. Alan Scarfe and C. David Johnson co-star in this television series based on the Jules Verne novel.