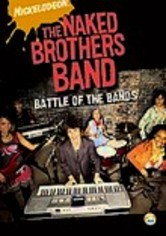 2007 NR 1h 10m DVD
In this special episode of the popular Nickelodeon series, Nat, Alex and the rest of the group enter into a charity-sponsored band competition and find themselves taking on Bobby Lowe and the L.A. Surfers, one of the coolest bands around. If that weren't bad enough, now Nat has learned that the love of his life, Rosalina (Allie DiMeco), is falling for dreamboat Bobby, a situation that Bobby plans to exploit to the fullest for the competition.

Parents need to know that you owe it to your kids to do a major reality check on this made-for-TV movie about the adventures of Nickelodeon's hugely popular The Naked Brothers Band. The young stars have no responsibilities whatsoever, live in the lap of luxury (big-screen TVs, indoor clubhouses stocked with games, etc.), and enjoy hordes of fans cheering them on wherever they go. Also, because the plot revolves around the "love life" of 11-year-old leader Nat -- he's devastated when his long-time crush falls for a flashy rock star -- there are more sexual references than you might expect for something aimed at tweens. A girl is called "hot" and "a good kisser," a tween pats a girl's bottom as she walks by (she responds by giggling and asking if she's being "punk'd"), and one scene shows a teen couple cuddled together and kissing passionately. Potty language is frequent (the main offender is the group's youngest member, 8-year-old Alex), partly thanks to a total lack of adult supervision.

A tween spends most of the movie mooning over his long-time crush, who's starry-eyed over a flashy but totally superficial teen music star. References include mention of a girl being "hot" and "a good kisser," a pat on a girl's bottom from an 11-year-old boy, and one scene showing a teen couple kissing passionately with their bodies pressed together suggestively.

A couple of brief scuffles that don't result in injury.

No cursing, but lots of potty talk: "butthead," "kick their butts," and an apparent substitution for a red-letter word ("What in the poo-poo sauce?"). Yuck.

Adult supervision is virtually non-existent; the only adult figure is onscreen for mere minutes of the movie, and he's cast as a goofball (his tween sons often poke fun at him). The movie's plot centers on an 11-year-old's full-blown obsession with his long-time crush, who's smitten with a teen rock star who's not exactly a perfect role model. The tween stars have no responsibilities (school, chores, etc.), but spend their days goofing off in their elaborate club room stocked with a TV, games, and food. Charitable work is placed in a negative light, as the penalty for losing a band competition is a forced monetary donation to a kids' foundation.

The guys enjoy lots of material luxuries, from big-screen TVs to games. The Naked Brothers are also part of an ever-expanding commercial empire, from a TV show to a CD and more.