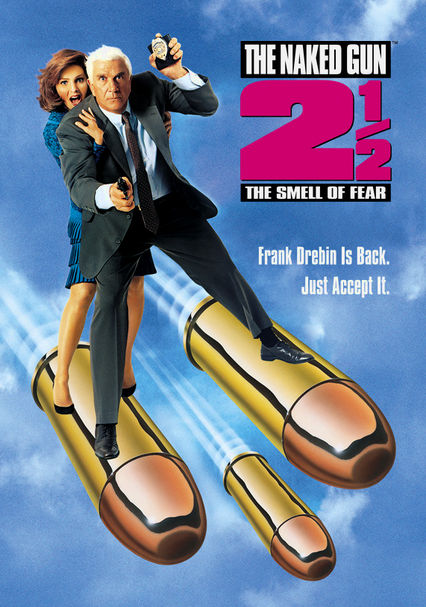 1991 PG-13 1h 25m DVD
The second film based on the "Police Squad" TV series, Naked Gun 2 1/2 finds bumbling cop Frank Drebin (Leslie Nielsen) out to foil the big boys in the energy industry, who intend to suppress technology that will put them out of business. As always, the jokes (and sight gags) fly like gunfire! Also returning from the first film are Priscilla Presley and George Kennedy.

Parents need to know that The Naked Gun 2 1/2: The Smell of Fear is a 1991 send-up of police procedurals that is part of the Naked Gun series. This male teenage dream is filled with good-natured juvenile raunch, bare bottoms, an anatomically correct vibrator in the background, breast jokes, comic sex scenes, vaudevillian sight gags, absurdist fight scenes, shoot-outs, and a poop joke. No subject is sacred, and jokes about the disabled, child molestation, racism, homosexuality, and incest are tossed as asides, making this movie an equal-opportunity (pretend) offender. All movie conventions are reproduced, tweaked, and mocked. Everyone will know that the detectives are stupid, the villains are stock, and the violence is comic (a bomb explodes in an office building, killing many, but dopey guards think it's only a clock) -- and therein (supposedly) lies the humor. Beneath all the crudity is a pro-environmental, anti-pollution message. Expect to hear the words "f--k," "Christ," "hell," and "bitch."

Both bottomless men and women are seen for comic effect. A woman is topless but only viewed from the back. There is a reference to sexually abusive Boy Scout troop leaders. A police artist draws a pretty woman in a tight clingy dress rather than the perpetrator she describes, prompting the lieutenant to suggest hiring a gay artist. A vibrator is shown at a sex shop, where a sales person also mentions a "sucking machine." A clothed man's face is accidentally pushed into a clothed woman's crotch. All sex is played for comedy. Two adults kiss; his chest is bare, and she puts her hand in his pants, pulls out a lump of clay, and then makes an ashtray while they make out. They have sex (no sexual body parts shown), accompanied by a montage of sexual and orgasmic images -- trains going through tunnels, fireworks, and the like. Someone reads aloud from a paperback called Strokin' the Love Muffin. "Purple-headed warrior" and "quivering mound of love pudding" are mentioned. A pair of handcuffs suggests someone's penchant for sadomasochistic sex, but none is seen.

All violence is staged to seem cartoonish. An explosion meant to be comic kills people. There are numerous fistfights and gunfights. A villain is accidentally thrown out the window of a multistory building. He lands unharmed but he is immediately (bloodlessly) attacked by a lion. A man in a wheelchair is catapulted off a balcony. He recovers. A police officer trying to plant a tracking device on a car is dragged by the car for blocks but survives.

Work to protect the environment. Expect the battle to be uphill.

Part of the Naked Gun series.