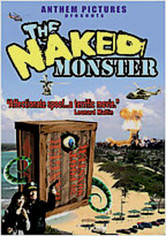 2005 NR 1h 40m DVD
A 60-foot-tall, three-eyed green Monstersaurus wreaks havoc on the planet as a sheriff, a scientist, a secret agent and a monster fighter try to stop its deadly rampage in this affectionate spoof of 1950s sci-fi films. Writer, co-director and B-movie historian Ted Newsom mixes in music and scenes from various old-time creature features, and the cast features many actors from those films, including Kenneth Tobey, Brinke Stevens and more.