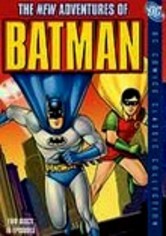 1977 NR 2 discs
The Caped Crusader and his ace sidekicks, Robin and Batgirl, take on Gotham City's villains in this animated series from 1977. Aiding the overwhelmed Police Commissioner Gordon, the crime-fighting trio is joined by the mischievous Batmite. On their battle list are Mr. Freeze, the Joker, the Penguin and more. Adam West and Burt Ward -- who starred in the 1960s live-action series -- lend their voices.