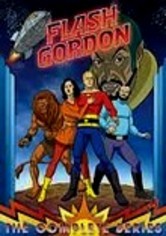 1979 NR 4 discs
Flash Gordon, spawn of the 1930s comic? strip character, is back for another adventure to the planet Mongo to prevent malevolent dictator Ming the Merciless from achieving universal domination. With the reinforcement of his girlfriend, Dale Arden, and scientist Hans Zarkov, as well as the aid of Prince Barin, the Hawk Men, Queen Fria and the Lion Man, Flash prepares to battle Ming and deflect the amorous advances of his seductive daughter, Aura.