The New Adventures of He-Man: Vol. 2 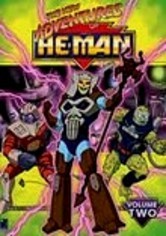 The New Adventures of He-Man: Vol. 2

1990 NR 6 discs
When the universe is threatened, Adam Greyskull -- aka He-Man -- takes action! Our hero is summoned to the future to defend the planet Primus against evil mutants. He wields the Sword of Greyskull, but the mutants are joined by He-Man's old archenemy, Skeletor. Will He-Man and the Galactic Guardians prevail? Or will Skeletor succeed in his quest for universal domination? Join He-Man, Captain Hydron, Drissi and all the rest to find out.