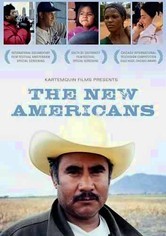 2004 NR 2 discs
Filmed over the course of four years, this award-winning documentary series that originally aired on PBS tracks the ups and downs of newly minted immigrants who are struggling to put down roots on American soil. The film captures the experiences of an Indian couple riding the dot-com boom, a pair of Nigerian families fleeing violence and political persecution, and two baseball players from the Dominican Republic, among other stories.