The Night of Truth 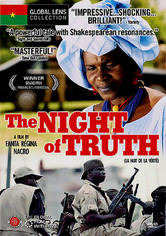 The Night of Truth

2004 NR 1h 40m DVD
Fanta Régina Nacro delivers an award-winning directorial debut with this moving drama set in an unnamed country in sub-Saharan Africa. It's a story of two tribes -- the Nayak and the Bonandé -- at the brink of reconciliation after a decade of violent conflict. As both sides convene for a celebratory feast to toast their newfound peace, night falls, stirring horrifying memories of the past that threaten to undo everything.