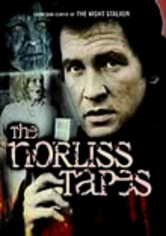 1973 NR 1h 12m DVD
When investigative reporter David Norliss (Roy Thinnes) disappears while writing a book about paranormal phenomena, the tapes onto which he's dictated his findings hold the only clues to his whereabouts. Angie Dickinson stars as the wealthy widow Norliss was helping in this tale of voodoo and occult violence from writer William F. Nolan and "Dark Shadows" director and producer Dan Curtis.