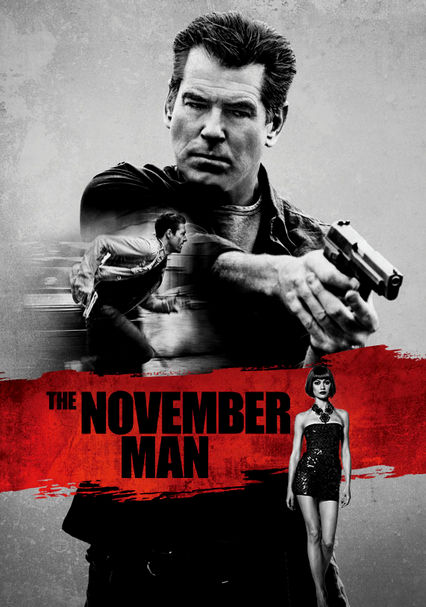 2014 R 1h 48m Blu-ray / DVD
Living peacefully in Switzerland after leaving the CIA, Peter Deveraux is none too pleased to be reeled in for a critical covert assignment. Soon, the resurrected spy finds himself caught in a high-stakes struggle between the United States and Russia.

Parents need to know that The November Man is an action thriller based on one in a series of novels by Bill Granger. Strong violence includes shooting, stabbing, chases, explosions, and scenes of spurting blood; main characters are killers who do their job without consequence. Women are treated fairly roughly from time to time. Main male characters are shown having sex, kissing, or in bed with women, though nothing graphic is shown. Nudity is shown in a background way, in both a photograph and at a topless bar. Language includes multiples uses of "f--k," "s--t," and "t-ts." One of the main characters is shown drinking heavily and angrily drunk in one scene. A woman in a club is shown snorting cocaine.

A scene takes place at a topless bar, with topless dancers on view. In a series of gory crime scene photos, one shot shows a woman in a bathtub, with her breasts on view. The younger main character is shown kissing a woman at a cafe. Later, he kisses another woman (his across-the-hall neighbor) and has sex with her (nothing graphic shown). Viewers see photos of the main character cuddling in bed with his wife. The main female character wears a tiny, tight, sexy outfit, with the intention of seducing (and deceiving) a bad guy.

During a shoot out, a child is shot in the chest, and blood is shown. Gory crime scene photos are shown. Many scenes of shooting, stabbing, chasing, punching, and explosions, with plenty of blood shown. Characters are shot in the head, with spurting blood. Women are treated roughly. A man holds a woman hostage and slices a major artery in her leg, resulting in a huge amount of blood. An assassin is bashed in the face with a shovel.

The movie touches on a few interesting themes, although not with much depth. A trained assassin discusses the conundrum of being both a killer and a human being, and how the two roles can't co-exist. It also deals with world politics and "the ends justify the means" methods that may lead to world peace, but at a price. Is it worth the price? Otherwise, the movie mostly consists of chase scenes and shoot outs.

The main character gulps down a few glasses of scotch after a harrowing escape. He's shown very drunk and angry in another scene, continuing to gulp scotch. A female character is seen snorting cocaine in a bar.