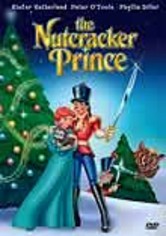 1990 G 1h 13m DVD
The timeless holiday tale of "The Nutcracker" springs to life as an animated musical. After young Clara receives a wooden nutcracker as a Christmas gift, she dreams about a fantastical battle between her Nutcracker Prince and the evil Mouse King. At stake is the Nutcracker's freedom -- and Clara's future happiness. Kiefer Sutherland, Peter O'Toole and Megan Follows lend their voices to this family-friendly adventure.

Parents need to know that The Nutcracker Prince is a 1990 adaptation of the ETA Hoffman story "The Nutcracker and the Mouse King." One of the bigger concerns for parents is the overall scariness of the Mouse King. His voice and general behavior seems tailor-made to give nightmares to younger kids. For parents expecting more songs and ballet, this scariness coupled with the battle scenes between the Nutcracker's army and the Mouse King's will be off-putting. There are other moments of mild cartoon violence throughout, but on the whole, this version of the Nutcracker features songs, dancing, and forays into magical realism. It isn't the best introduction to The Nutcracker, but for fans especially, it's an interesting version.

The voice and behavior of the Mouse King could be too scary for younger or more sensitive viewers. A girl is knocked unconscious after she slips and bumps her head on a grandfather clock. At different times, characters are ordered to be decapitated. An executioner wields a large sword. Throughout the movie, the Nutcracker's army does battle with the Mouse King's army, fighting with toy weapons.

There are glasses of wine on the table of a royal feast, but they are not consumed by any of the characters.