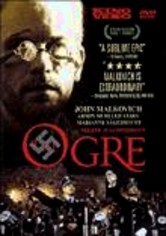 1996 R 1h 57m DVD
The outbreak of World War II helps a French simpleton named Abel (John Malkovich) -- who was wrongfully accused of attacking a young girl -- avoid prison time. But when his army unit gets captured, he's imprisoned in a Nazi camp. The film unravels into a dark fairy tale in which Abel is groomed to train Hitler youth under the direction of &NFider Führer&NFi_;'s right-hand man, Hermann Goering (Volker Spengler).