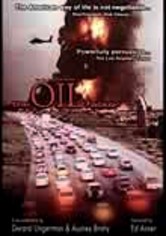 2005 NR 1h 33m DVD
Despite official statements that U.S. wars in the Middle East and Central Asia are being waged in the name of terror, it's hard to ignore that three-quarters of the world's oil supply comes from these regions. Narrated by Edward Asner, this thought-provoking documentary explores the realities of the conflict in Iraq and Afghanistan and sheds light on the United States' true motives. Featured experts include Noam Chomsky and author Ahmed Rashid.