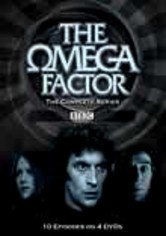 1979 NR 3 discs
Tag along with Tom Crane (James Hazeldine), a journalist with a nose for weird news, as he uses his prodigious psychic powers to keep British intelligence apprised of various supernatural forces dubbed the Omega Factor. A blend of "The X-Files" and "Medium," the first 10 episodes of this hit BBC television drama exploring mysterious occurrences and strange, unexplainable phenomena co-star Louise Jameson and John Carlisle.