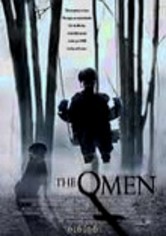 2006 R 1h 50m Blu-ray / DVD
Grieving U.S. ambassador Robert Thorn (Liev Schreiber) brings home another baby to soften the blow when his wife, Katherine (Julia Stiles), loses their first child during labor. But as young Damien (Seamus Davey-Fitzpatrick) grows up, horrific things begin to happen as his devilish lineage asserts itself. Mia Farrow, David Thewlis and Pete Postlethwaite round out the cast in this chilling remake of the 1976 horror classic.

Parents need to know that the film concerns the antichrist and the "end of days," and uses brief images of recent disasters (9/11, Katrina) to suggest the time is near. The film includes extreme violence and bloody images of deaths engineered by Satan/evil forces; the most gruesome images include characters speared and beheaded and a knockdown fight between a father and the nanny. The film also includes a mother saying she wants to abort her second child, seeing a psychiatrist, being terrorized and injured by her son (a scary fall from a balcony), and a father's decision to kill his own young son. The film also contains some strong language, including two uses of the f-word.

Katherine appears in a tub, but nudity is only implied.

Deaths are bloody, grotesque, and explicit (car explodes and burns passenger, men speared and decapitated by falling architecture); big loud dogs attack several characters; woman hangs herself off a rooftop in public; mother falls from balcony, with flailing limbs and plaintive scream (this might bother younger viewers even more than the bloody stuff); nanny poisons and throttles incapacitated woman in hospital bed; father tries to kill his son (using multiple knives, inside a church).-

Two f-words, one "damn," one "hell," frequent discussions of God and Satan, lots of screaming in fear and fury.

No one acts very admirably.