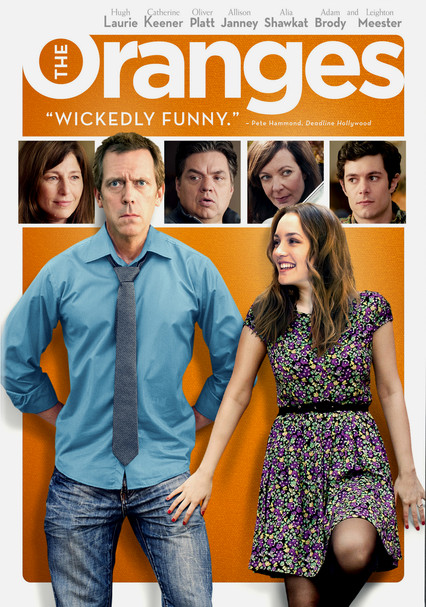 Parents need to know that The Oranges hits some interesting notes about life, marriage, and more, but much of the material may be too heavy for younger teens. The plot centers around an adult who falls for his best friend's daughter, who happens to have been his own daughter's childhood pal. There isn't any nudity (though viewers do hear the sounds of a sex toy in use), but the situations between them are cringe-worthy. There's some swearing ("f--k," "s--t," etc.) and drinking, and a twentysomething woman is shown smoking pot.

Kissing and heavy flirting between a married man and his friend's daughter. One scene shows two pairs of feet under covers, with a sex toy audible. A girl walks into a room and catches her boyfriend cheating, though viewers don't see anything actually happening. Sexual references.

A woman drives her car onto her lawn in rage, smashing Christmas decorations. She also slaps a young woman. A man lunges after his friend in a fit of anger.

Your entire world can fall apart, but chaos can ultimately lead to fulfillment -- if you can ride the chaos until it's run its course. That said, there doesn't seem to be much empathy here for collateral damage as the result of bad decisions.

One character likes to buy a lot of gadgets; viewers don't actually see a lot of labels, but it's clear that buying them and having them is what makes him happy. A woman works at Huffman Koos furniture store, and their logo is everywhere.

A twentysomething woman is shown once with a pipe, smoking pot. Some social drinking at parties.