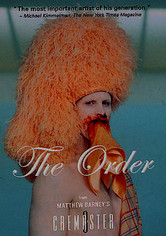 2002 UR 0h 31m DVD
The middle installment of performance artist Matthew Barney's controversial Cremaster film series concludes with a chaotic set piece that unfolds in New York's Guggenheim Museum. Barney portrays a character known as "The Apprentice," who must traverse the museum's ramped levels while tangling with a kick line of scantily clad dancing girls, a cheetah woman (double-amputee model-athlete Aimee Mullins) and a war between two punk bands. Weird!